Several years ago we spent a Christmas night in the small village of Colonia de Sacramento, Uruguay as part of our visit to Argentina. We loved Uruguay then and it didn’t let us down this time around. Our Antarctic cruise concluded in the Uruguayan capital of Montevideo and we spent one day exploring the city. We watched our ship, the MS Fram exit the harbor and sail out the Rio de la Plata on its way to the Amazon and then on to the Arctic.

Along the Rio Plata

We also acted on numerous recommendations to eat at El Palenque. This is the most famous Uruguayan barbecue place, located in the old port in Montevideo. You’ll see from the pictures that we had a great seat to watch the expert chefs prepare the world famous meat and vegetables on the large grill.

After a night in Montevideo we rented a car and drove to the beach resort of Punta del Este. Punta del Este is located on the confluence of the Rio de la Plata and the Atlantic Ocean and is the home to summer fun for the rich and famous of South America. Beaches lined with shining high-rise condominiums owned mostly by Argentines, the area is also home to big yachts and very modern homes. We stayed at the Conrad, a big hotel and casino, which is the site of many events and conventions. This weekend there was a weird car race around the front of the hotel on Saturday night as well as a road bike race on Sunday morning.

One of the draws of this area is the burgeoning wine industry. In the past decade, young, creative winemakers have begun developing vineyards in the farmland around Punta del Este. In addition to Tannat wines, the area is becoming well known for producing great sauvignon blancs and merlots. We visited two of the newest bodegas around Punta del Este and were impressed with the wines, as well as the interesting buildings in which they are made.

On one day we drove to Viña Eden, a newly opened bodega north of Punta. While tasting several great wines we chatted with Juan Pablo, the winemaker and his cute wife Veronica. We then drove to the beachside town of Jose Ignacio, where we watched the big waves crash around the lighthouse. While there we met this guy from Argentina who was excited to talk to us as soon as he realized we were American. His dog was named Obama (dog tags were proof) and we just “had” to meet Obama! One of many fun encounters on this adventure! 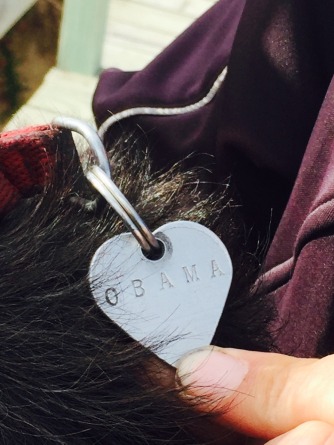 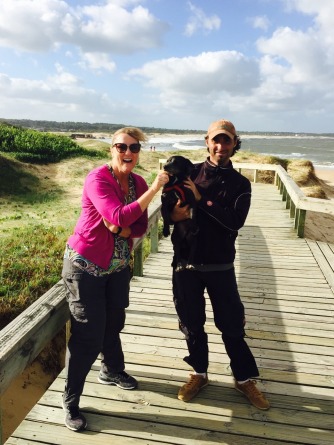 While on trips like this we like to do a tour once in awhile to give us a different perspective on a place. Here we booked a wine tour with The Wine Experience, led by South African Ryan Hamilton. On Friday evening Ryan picked us up and took us to Restaurant and Bodega Narbona for a private tasting of this small vinyard’s wines. From there we went back out to Jose Ignacio, up the coast, to a private tasting at the exclusive Playa Vik hotel. We arrived just in time for sunset and enjoyed taking pictures around the negative edge pool, overlooking the Atlantic Ocean. The property features very modern furnishings and artwork, which you can see in the photos. The wine was great too!

On our final day in Punta del Este we drove out to Bodega Garzon, a new and very large operation that is redefining Uruguayan wine. Here we took the harvest tour, which included the opportunity to cut grapes in the vineyard.

We both decided that while it was fun for a few minutes, we didn’t need to do it for days on end and we have a new respect for the workers who harvest grapes for our wine. It’s backbreaking work, and at Garzon, all 500 acres are harvested by hand! The harvest was followed by a tour of the newly opened bodega, which features production facilities underground. We highly recommend a visit to Garzon, for the wine and the scenery.

We then drove back to the beach of Jose Ignacio to have lunch at the acclaimed La Huella. This popular beach restaurant draws crowds from Argentina and Brazil and it was packed! Luckily we had a reservation and enjoyed great fish and wine with a view. Our day finished up with another spectacular sunset at the famed Casapueblo, an elaborate building constructed by the Uruguayan artist Carlos Páez Vilaró. It was originally a summer house and workshop of the artist, and is now a museum, an art gallery, a cafeteria and a hotel. It was the perfect end to a perfect stay in Uruguay and to an incredible South American/Antarctic journey.

We are looking forward to spending some time at home in Prescott and Puerto Peñasco over the next few months, while planning our next adventures. Thanks for following along!

Like most Porteños, we fled the city for the holiday. Real Porteños go to the beach, which is about a five hour drive. We just took a one hour boat ride across the Rio de la Plata to the beautiful town of Colonia de Sacramento, Uruguay. It was a lovely place to spend a day.

To to get here we took the modern and fast Buquebus ferry. Comfy seats, wifi, and television made the trip painless. Upon arrival we were greeted by our guide Fabian and our driver Julio. Yes, we’ve had two drivers, both named Julio. Immediately we took a tour of this small town of 25,000 people. Colonia was originally settled by the Portuguese and was the site of many battles between the Portuguese and Spanish. Even the English gave it a shot. 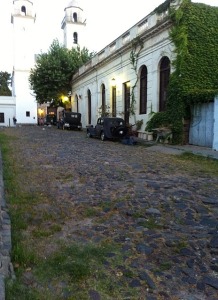 Today, the city is a UNESCO Heritage Site, which means the buildings and structures are preserved. Fabian showed us how you could tell the difference between streets made by the Portuguese and those made by the Spanish (Spanish road drain on the sides, Portuguese down the center). We visited the old bullring that has not been used since the Uruguayans outlawed bull fighting in the early 1900s.

After Fabian finished our tour, we set out to explore on our own. There wasn’t much more to see but we stumbled upon Los Farolitos, the little sandwich shack on the main road. Los Farolitos is known for its chivito, a huge sandwich with a thin slice of beef, ham, cheese, fried egg, bacon, and a bunch of other things that make it yummy. 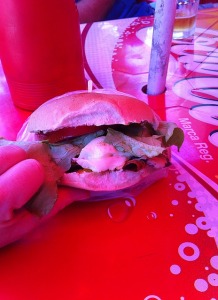 We enjoyed watching the town’s people prepare for Christmas while eating our chivito and sharing a beer.

It’s really warm here, like a summer day in Arizona. So, after our lunch we took to our air conditioned room at the Hotel Plaza Mayor. The hotel is right off the main square and has a beautiful garden courtyard. Steve went out on his own for a haircut and a run while I read and napped. We needed to save up a bit for the big Christmas Eve festivities.

Tonight we had dinner at Pulperia de los Faroles, which sits on the main square in Colonia. All of the tables were set up outside, lit with candlelight. We shared dinner with locals and tourists, enjoying the Uruguayan wine tannat. It was yummy. The festivities peaked at midnight with fireworks and champagne. In fact the fireworks went on throughout the neighborhoods for several hours.

We’ve seen a lot of stray dogs. They are fat and happy, as they are known as community dogs, and people take care of them. The numerous dogs roaming throughout the dinner area were sure satisfied. I tried to give a potato to one and he wasn’t interested. When our Argentine friend at the next table offered chicken, the dog scarfed it down.

Back to Buenos Aires for more city exploration tomorrow.

Merry Christmas to our friends and family!