Today we woke up stuffed from our fantastic dinner last night. Argentines eat very late. It was after midnight when we finally finished and that’s been the norm for most of our nice meals. When in Argentina…

Our guide Aida and a new driver picked us up right on time and whisked us away to Familia Zaccardi, one of the biggest wineries in the area. In addition to producing the Santa Julia line of wine, they also have a number of higher end wines of almost any varietal your can imagine. These are the big guys in Mendoza when it come to volume. They also have a well orchestrated tourist infrastructure, including two restaurants, tasting tours, bike tours, and coking classes. We were booked on the full day Zuccardi experience. What a day it was!

We were first greeted with espresso and candies. After a little introduction to the winery we met Aurora, the chef who would lead our cooking class. For the first part of the class it was a private lesson as the other group was late to arrive. So, we got lots of attention.

First course was to make the dough for bread.

We mixed the flour, salt, yeast and other ingredients and kneaded the bread by hand. It took us awhile to get the hang of it but eventually we got it. As the dough was rising we moved on to making empanadas.

Aurora showed us how to make a special onion empanada, a beef version, and one filled with three cheeses. Each one is folded a different way and that’s how you know what’s inside. Steve’s didn’t always look like Aurora’s but it was good for a laugh and they tasted the same. 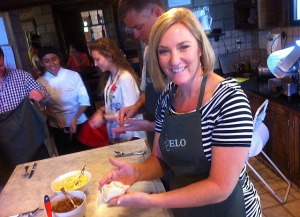 After empanadas we made pastelitos, little pockets of dough filled with jam. In this case ours were filled with quince, a specialty of the region. The pastelitos are folded into little stars with the jelly in the middle. They are deep fried in olive oil that is produced on site. Out of the fryer they are sprinkled with powdered sugar.

By now the dough had risen and we needed to make our baguettes. Aurora showed us how to roll the dough with our hands and form it into a loaf. You can probably tell from the picture which one is Steve’s. The dough was topped with either oregano or sesame and then put into an outside clay horno, or oven, to be browned. The empanadas were also baked in the horno and it didn’t take long for the tasty treats to be ready to eat.

We had certainly worked up a thirst so we enjoyed the fruits of our labor with a glass of Malbec. While enjoying our first Malbec of the day, we watched as the chef grilled the meats for our lunch. The traditional grill was fueled by burning old vines and it smelled so good!

Following the the cooking class we toured the wine production facilities and enjoyed tasting a Sauvignon Blanc and another Malbec. All of this and it wasn’t even lunchtime yet!

Our lunch at Zuccardi was a traditional parrilla style barbecue.

Along with salad, grilled vegetables, marinated organic tomatoes, they brought out over eight cuts of sizzling meat including, chicken, sausage, ribs, and a variety of cuts of beef. Steve was in heaven and ate almost one of everything. It seemed to go on and on! The meal was accompanied by other Zuccardi wines, a white, rose, red, and late season wine, which is a sweet dessert wine. Dessert was a tender baked apple and ice cream covered in dulce de leche, a special caramel sauce that is served everywhere. Oh, and then we had coffee and cookies. We didn’t return to our hotel until almost 4:30. Once again, stuffed and satisfied.

We may attend tonight’s tasting here at Club Tapiz but will certainly skip dinner. It’s gonna be a rough return to the gym in January and tomorrow we have to do it all again but at different wineries.