We are half way through our New York City adventure and time is flying. Each day we experience something so new and amazing that it’s hard to remember everything. Here’s a summary of the highlights of the last week or so.

On a beautiful fall Sunday we took a cruise up the Hudson River to check out the fall colors. 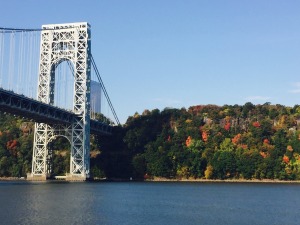 The two and a half hour sail north took us past the Cloisters, Sing Sing prison, and Younkers. Our destination was the Bear Mountain State Park, where we enjoyed brunch and the fall colors. The Brooklyn Dodgers, the New York Giants, and the New York Knickerbockers made the inn at Bear Mountain, and the adjacent athletic facilities, their training headquarters in the 1930s. The lodge was considered one of the finest examples of rustic Adirondack architecture in America upon its opening in 1915. During the sail back to the City the boat hosted an Oktoberfest with German food and live music. It was a pleasant day out of the City.

We learned during one of our earlier tours that the famous auction house, Christie’s, is open to the public. Antiquities and collectibles in rotating displays are available to view and even handle prior to each auction. We were lucky enough to drop in on the last viewing day of “The Golden Age of Baseball” collection. The auction, held the following day, featured baseball memorabilia from the earliest days of the game. 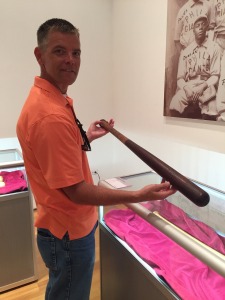 Steve got to hold a bat used by Shoeless Joe Jackson, which sold the following day for $583,500.

One tourist activity that we’d yet to do until this week was to cross the Brooklyn Bridge on foot. On one of the last warm days of the year we took the subway to Brooklyn and walked back into Manhattan, enjoying the views along the way. The bridge links the two boroughs and is considered an engineering marvel. One tradition is for couples to hang a lock on the bridge and throw the key into the river below as a symbol of their love. With so many locks affixed to the bridge, the integrity of the structure was being compromised. On October 7, the City began a campaign to discourage people from leaving their locks of love. You’ll see in the pictures a few remaining locks, as well as the signs discouraging the practice.

After we crossed the bridge we headed to Katz Deli, known as the place where the famous scene in When Harry Met Sally was filmed. 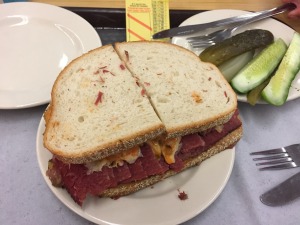 We had the best rueben on the planet, while sitting in the spot where the famous line, “I’ll have what she’s having,” was filmed. From there we walked through the Lower East Side to another landmark, McSorley’s Old Ale House. Established in 1855, McSorley’s is New York’s oldest continuously operating saloon. It’s served beer to historical figures including Abraham Lincoln, Teddy Roosevelt, and Boss Tweed. The bar was not open to women until 1970. They only serve two kinds of beer: light and dark. Of course, we tried both!

Yesterday we connected with the father of one of Steve’s former Skyline teachers. Karl and Marian live just outside of Queens on Long Island and were our hosts for the day. We explored famous Long Island locations including Jones Beach and Southhampton. After our day on the island, they drove us back into the City. The day gave us a different view of the area and their hospitality was unforgettable. We are grateful for their willingness to show us around. 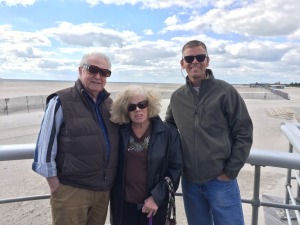 In addition to exploring new territory, we have been taking advantage of the rich music scene here in New York. In the past week we caught one of our favorite Arizona/Rocky Point bands, Roger Clyne and the Peacemakers at a local music venue. We had front row seats and loved being up close to the guys, who we’ve seen live in Mexico several times. A few days later we saw Bon Jovi at the Barrymore Theater on Broadway. We were given these tickets after we attended the Good Morning America taping where Bon Jovi promoted his new album. At the intimate, invite-only show, the band played the new album and a few favorites. We felt lucky to be there. Tonight we are seeing Foreigner launch their acoustic tour at Carnegie Hall. Finally, on Friday the concert extravaganza continues when we catch Billy Joel at Madison Square Garden.

The City is now in full-on Fall mode, with changing leaves and Halloween decorations popping up everywhere. See the photo of our building decorated for Halloween. The skating rink at Rockefeller Center is now open and the first holiday market opens next week. Stay tuned for more adventures as we head toward the New York City Marathon and the holidays in the coming weeks!