For the past week we’ve been off the grid, exploring one of the world’s most incredible wildernesses. Torres del Paine National Park is the pride of Patagonian Chile and attracts tourists and hikers from around the world. We spent 7 days in and around the park, tackling the famous W trek, as well as a few other choice spots in the area.

We stayed at the highly rated EcoCamp Patagonia in a standard dome. While we upgraded on the first night to a suite dome with a private bath, we were unable to reserve the more luxurious accommodations for the entire stay. Thus, the standard dome and the shared bath wasn’t the most spacious and swanky lodging we’ve ever had, but it was a lot better than a tent!

From our dome window we could see the Torres, the highlight of the park, and the stars, sunrises, and sunsets were amazing. We were not overwhelmed with the EcoCamp service but the surroundings made up for the lack of attention to detail at the facility.

On the seven hour drive from Punta Arenas to EcoCamp we stopped at the Cueva de Milodón, The large wave-like grotto was home to the prehistoric mylodon, a giant ground sloth that has been extinct since humans arrived in the area. His (her?) bones and manure were found at the site and have been carbon dated at roughly 10,400 years BC. The mylodon was basically an early Big Foot. And, the cave provides a nice opportunity to stretch during the long trip to Torres del Paine.

The primary reason for visiting Torres del Paine is to attempt the Classic W trek. This is a four day hike on the park’s most famous trails. Our group of 10 hikers and two guides set off on Tuesday morning to a clear blue sky. On this day we hiked from EcoCamp to the Cuernos Refugio, which was about an 8 mile stroll along the beautiful glacial Lake Nordenskjold. The refugios in the park consist of primarily bunk houses with very mediocre food. At the first night’s refugio we were happy to learn that EcoCamp was able to reserve us a cabana, which was a little A-frame cabin for two. The privacy was a nice surprise, even though we had to walk outside a few steps to the shared bathroom. 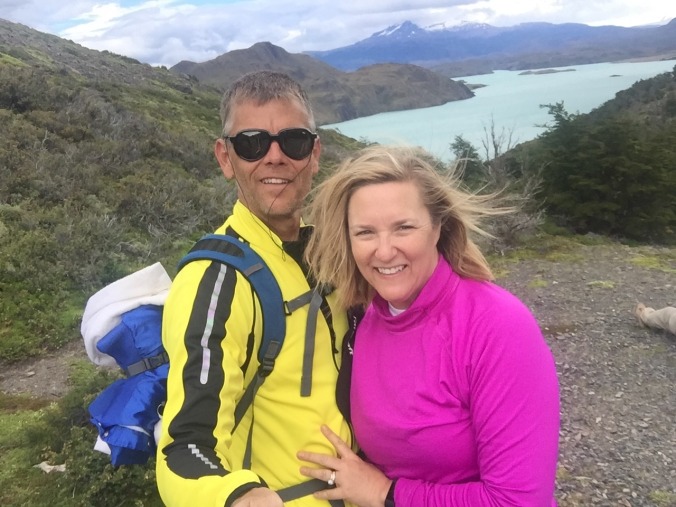 Day two of the trek is to the French Valley. The 16 mile hike is one of the harder paths in the park. It was a 10 hour day but the views were totally worth it. Steve went to the furthest lookout, while Marnie turned around after the first lookout, saving about 3 hours and 3 miles of uphill walking/climbing. Still, it was a long day for everyone. We finished this portion of the hike at the Paine Grande Refugio, which is perched on the banks of Lago Pehoe. Here we shared a room in a bunk house with four fellow hikers. Since we’d all been hiking together for several days, we were all friends by this point and enjoyed the experience, which of course included a nice bottle of Chilean wine.

By the third day, after two nights of refugio living, shared bathrooms, and pretty crappy food, we were ready to return to EcoCamp’s luxuries. Before that, however, we completed another 7 mile hike, ending at the Gray Glacier. The views of the glacier were spectacular and once we reached the end of the trail, we boarded a boat which took us close to the glacier wall to see the sparkling blue ice in detail.

There was even a large floating piece of ice that had broken off the glacier three months before. The iceberg had formed an arch and was a spectacular site. After the cruise we returned to EcoCamp for a tasty meal accompanied by good Chilean wine. The Carmenere is now one of our favorites.

The fourth day of the trek completes the W, which is the shape the trails forms on the map. We awoke to a rainy and foggy morning. The signature hike to the Torres, or towers of granite, is another 14 miles path, pretty much straight up. After three days of hiking, Marnie took a break on this day, and Steve tackled the challenge without problem.

We finished our time with the group of 10 with an easy hike on the Fauna trail, which is about 6 miles through the habitat of the guanaco. Guanacos are a cousin to the llama and are prolific in and around Patagonia. We were able to get very close to these exotic creatures, along with their babies. Here guanacos live in large herds of females and chulangos (babies), with the males fighting for the right to the herd. We saw some of the competition between males and even saw guanacos breeding. Babies are born between November and February, so we saw lots of little ones. Amidst the guanacos you’ll also find rheas, which are like ostriches, only smaller. This place is truly incredible.

To top it all off, we spent our last day in Torres del Paine tracking the elusive Baguales. Baguales are Chile’s version of the mustang, and there is a herd of 100 of these wild horses living in a remote area of Torres del Paine. We joined six other travelers for a full day of learning about the horses, hiking off trail to find them, and finally watching them graze, play, fight, and breed from a distant hilltop. These aren’t just any old horses. The herd has some unique behaviors that scientists are now trying to study. First of all, the stallions co-exist in the herd, which is very unusual. We were led by Victor, who is a veterinarian by training and has a passion for studying and preserving these beautiful animals. We learned about his research and his ambitious plans to protect and preserve these beautiful creatures. Our day finished up at Lago Azul (the blue lagoon) with a traditional Chilean barbecue of beef, lamb, chicken, and chorizo served with great Chilean wine and homemade ice cream. It was the perfect way to end our exploration of this incredible place.

We’ve now traveled by bus from EcoCamp to the Argentine town of El Calafate where we’ll spend the next week exploring the region’s glaciers and trails. More to come on that in the next blog post.

Thanks for following along!