We spent our first of three days in the Falklands in the main city of Stanley. The Falklands are a British territory, yet have a storied past with claims to the islands from France, Spain, and of course, Argentina. The 1982 Falklands War most recently clarified Britain as the rulers of this far away place.

The city is not much of anything. There is a museum, various war memorials, including a bust of Margaret Thatcher, a handful of pubs, and that’s about it. The real interest here is in the outer islands where we’ll see more unique wildlife in the coming days. For this stop, we checked email, had a locally brewed beer, and bought some souvenirs.

On Thursday, March 9, 2017, our first of two stops today was at New Island, Falkland Islands where we endured a rough landing. The weather was grey and windy, and the swells were pretty high. Needless to say, it made for a fun and wild ride in the Polar Circkel boats to the land. We got a little wet, but our rain pants and muck boots kept us warm and dry. 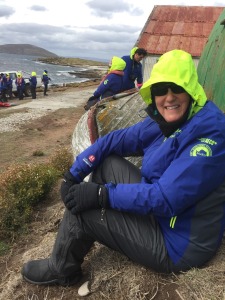 New Island is one of many islands on the western side of the Falklands. There is a small settlement with a few residents, and they were at the landing site to greet us. It seems the arrival of a cruise ship with 200 passengers is a big event in these parts.

On New Island the big attraction is the Rockhopper penguins. This was our first sighting of these penguins, and they are really cute. They have a little tuft on top of their heads and white markings near their eyes, which make them look a little evil. Mostly, however, they just sit on the cliffs and endure the wind. They live among Black-Browed Albatross, which are the biggest birds in the skies here. We enjoyed sitting and watching the large birds stretch their massive wings.

After communing with the Rockhoppers and albatross we climbed to an overlook for a panoramic view of the surrounding islands. Desolate is one way to describe it.

Rockhoppers with an Albatross

Our second landing today was to nearby Carcass Island. We didn’t have a lot of time here, but we did partake in the island’s highlight: cake. Rob and Lorraine McGill have lived on Carcass for 40 years raising sheep. Now they entertain the few cruise ships that stop by opening their home and serving tea and cakes. We enjoyed the hospitality and a warm drink before going back to the ship.

On an expedition ship like the MS Fram, you won’t find the usual cruise ship features that we’ve come to expect. For example, there is no casino, no fancy productions, and only a small shop that sells essentials. Instead of bingo or art auctions, the cruise features lectures from the on-board expedition team, all of whom are experts in their respective fields. The team included marine biologists, ornithologists, geologists, and many other –ologists. Most evenings we went to bed early, as there were no song and dance shows or other spectaculars. One exception, however, was the crew show, which featured dancing and singing from the crew members. Many of the service crew members are from the Phillipines, so we were entertained with native dancing, karaoke singing, and more dancing. 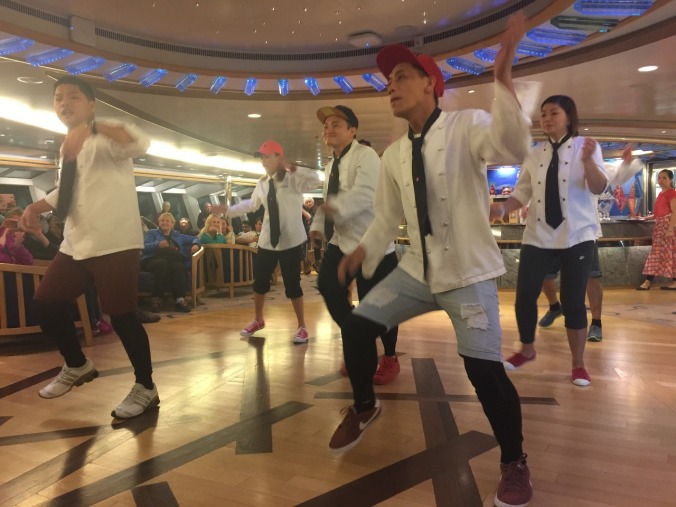 It wasn’t like the Broadway-like shows you see on a big cruise, but there was something special about seeing your favorite waiter dance and sing. We’ve included a few photos of the show.

The final landing of our adventure was on Saunders Island, West Falkland Islands, also part of the Falklands. Saunders was originally settled in the 1700s by the British and is now home to a lot of sheep. Again, the local shepherds came to the landing to greet us. Saunders is home to the best variety of wildlife we found in one place. During our two mile stroll along “the neck,” we found huge colonies of Gentoo and Magellanic penguins, King penguins with chicks, and Rockhoppers up on the cliff. Of course, there were also sheep.

Marnie and a penguin friend

The weather was perfect for our visit, with light winds and even a little bit of sunshine. All in all, Saunders Island was the perfect way to top off our exploration of the South Atlantic islands. After three relaxing days at sea, we arrived in Montevideo, Uruguay and concluded the cruise portion of our trip. Next we’ll head out to the “Miami Beach of South America,” Punta del Este, Uruguay, where we’ll spend our final week soaking up the southern sun. More to come…