The California Redwoods have inspired poems, songs, and many dreams.  This was one National Park we just had to check out. Warning: Be prepared for a lot of pictures of trees!

After leaving Sequoia and Kings Canyon National Parks on the Western slope of the Sierra Nevada range, we drove north towards the Bay Area. We spent one night at a nice park in Lodi and another night at the KOA in Petaluma on our way to the most northwestern corner of the state. While the Redwoods were our destination, the journey through California’s wine country was very much worth it.

In Petaluma we enjoyed what Steve considers some of the best IPA in the world: Lagunitas Brewing Company. Here Bob and Mia could join us in the outside restaurant which was amply spaced to accommodate social distancing. 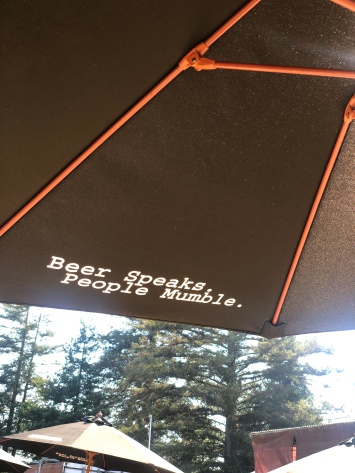 While in the area we also took a 30 minute drive to the coast for our first view of the Pacific on this trip. Bodega Bay is a beautiful hamlet on the coast with a nice harbor and sweeping views.  We were only there for a short while to take in the views.

Our first peek of the redwoods was on the Avenue of the Giants, part of Humboldt Redwoods State Park, a 32-mile diversion from Highway 101. While technically not part of Redwoods National Park, this stretch of road gave us a glimpse of what was to come. 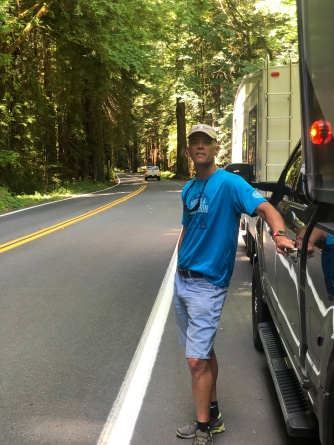 We spent one night at the funky Emerald Forest Cabins and Campground in Trinidad. Trinidad is a beautiful little seaside city but we only stayed long enough to check out the town and for Steve to have a Cuban cigar beside the fire. 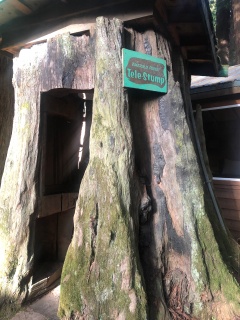 The next morning we drove to our home for the next three nights, the Klamath River RV Park.  This is probably the best place we’ve stayed so far in terms of space between vehicles and overall setting. We were right on the Klamath River and just a few miles upstream from where the river meets the ocean. 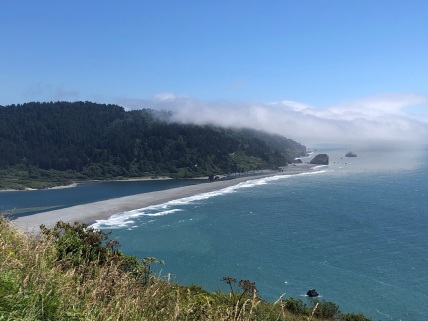 Redwoods National Park wasn’t established until 1968. Even then it was a surrounded by several state parks.  Today, the National Park and three State parks are jointly managed and share the goal of preserving and protecting this incredible natural wonder.

We began our exploration in Lady Bird Johnson Grove, the site of the dedication of the National Park in 1968. The easy 1.6 mile loop trail through old growth forest gave us a great introduction to the uniqueness of this forest. With my boot, I was able to comfortably make it all around the loop. 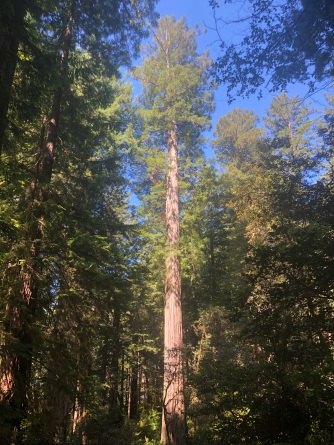 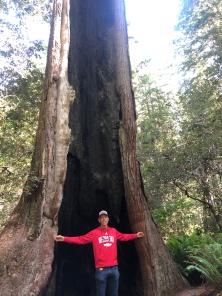 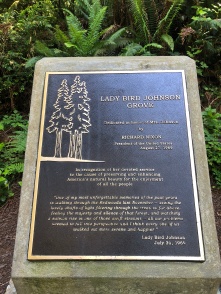 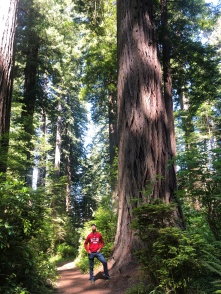 From there we entered Prairie Creek Redwoods State Park and explored Fern Canyon. 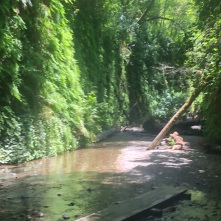 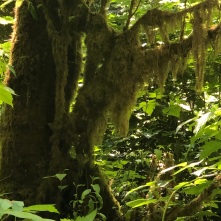 This little hike was a little less than a mile but the planks and occasional logs made it a bit challenging for a booted hiker.  Nevertheless, we soaked in the verdant green fern covered walls, site of the film Jurassic Park 2. You could almost imagine the dinosaurs coming down from above. 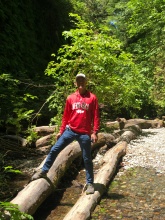 The next day we headed north to Jedidiah Smith Redwoods State Park, north of Crescent City. Today’s short hike was to Stout Grove and Steve did this one on his own while I waited with the dogs in the parking lot. 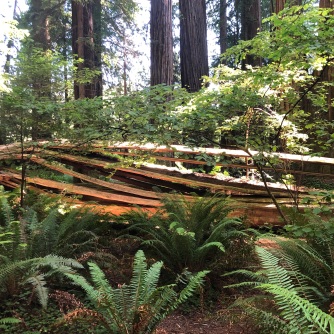 It seems I may have overdone it just a little with over 4 miles of hiking yesterday. A little ice and elevation and it’s all good.

This area of the Redwoods protects 10,000 acres of primeval redwood groves and was a feast for the eyes.  We drove a back road with trees so close to the road that our Ford F250 barely fit. 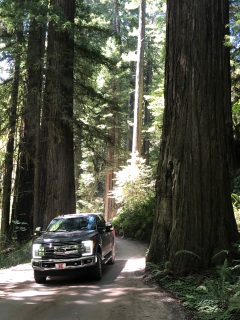 Around us were 2000 year old California redwoods, ferns, and a lush undergrowth of rhododendrons and azaleas.

Of course we are still traveling in the age of COVID-19 and the signs are everywhere. For the most part people are wearing masks and keeping their distance. But still, we are warned of COVID and other things (including attacking elk)  everywhere we go. Yes, we are being very careful. 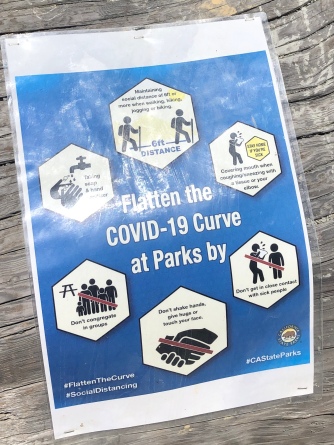 At least once a day Steve is running or biking. In Klamath he took the bike out for a 16 mile ride along the coast. I really wanted to go but he brings me photos. 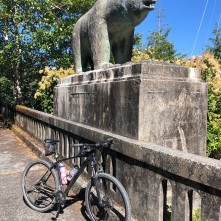 Here are a few things we’ve learned during our time in Sequoia and then Redwood National Parks:

We give the win to the larger Giant Sequoias but the Coast Redwoods were certainly impressive! If you’ve seen them both, we’d love to hear which species you prefer. Here are a few more photos of this amazing part of the USA.  Happy Independence Day!