We’ve spent the past ten days exploring the valleys and coastline north of Seattle. Our destinations were somewhat defined by the locations of our Thousand Trails campsites. This isn’t an area we had on our bucket list, but it should be on yours, and it’s one we are happy we explored. We have really enjoyed driving the country roads, discovering farm stands, u-pick berry sites, and local bike trails. 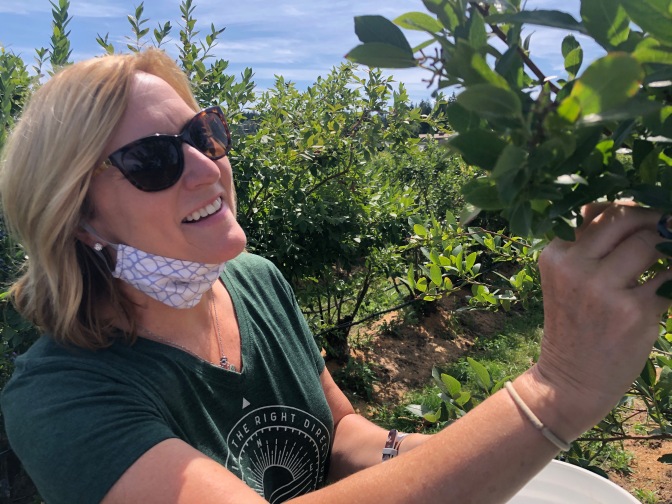 After we left the Olympic Penninsula we headed to Monroe, WA and the Thunderbird RV and Camping Resort. Monroe is about 35 miles northeast of Seattle and our campground was located on the Skyhomish River. From our base we explored the cute town of Snohomish and found the incredible Centennial Trail.

The Centennial Trail is a rails-to-trails route that covers a 30 mile route through cute towns and fertile valleys. We rode on the trail on two consecutive days.  First we started in Snohomish and rode north to Macias. The next day we went further north and rode a section near Lake Stevens. 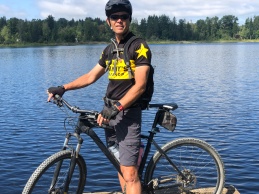 We rode a third day too!  Our final outing was from the northernmost trailhead of the Centennial Trail. The trailhead is defined by the Nakashima Heritage Barn, a 1906 structure owned by the first Japanese-Americans to farm in the area. They operated it as a dairy farm until 1942 when they were forced into internment camps and sold the farm. We really liked this trail!

In between the bike riding we stopped at a number of farm stands to explore the area’s fresh produce.

Steve bought and pickled cucumbers he said tasted like candy. We also visited the Loggers Inn in Sultan. They claim to be the “oldest in the west” but we’re not sure what that meant since the building was built in the 70s. Nevertheless, Bob and Mia enjoyed one more beer garden.

For four days we camped at the La Conner RV and Camping Resort in La Conner, WA. La Conner is on the coast about 70 miles north of Seattle and less than 10 miles south of the port city of Anacortes. One day we ventured even further north to the very cool city of Bellingham to do a little shopping and sight seeing. Wandering the Whatcom Falls Park in the center of the city reminded us of New York’s Central Park. Greenspace in a city makes all the difference.

More beautiful scenery and a stop at a shellfish farm punctuated the day. Steve got oysters from Taylor Shellfish Farm and enjoyed them the next night.

The little town of La Conner was a fun hangout right on the water. We had lunch, strolled the main street, and watched the boats float by. Evenings are usually filled with a sunset walk and maybe a campfire.

We’re getting pretty good at making s’mores. All in all we’ve had great weather and for that we’re thankful.