We finished off 2013 in a big way by taking on The Ridge Walk here in Bariloche. We are staying in the middle of a magnificent national park called Nahuel Huapi, which includes some of Argentina’s most popular and spectacular trekking and rock climbing sites. We joined nine other travelers from the estancia and were accompanied by two guides. Together we tackled a difficult trek called The Ridge Walk.

Leaving the estancia at 8:45, we drove about 30 minutes north to the popular ski resort of Cerro Catedral. In the winter this place is pure white. Today it was bare, with a few lingering patches of snow. It’s the height of summer here, so the primary activities are hiking, not skiing.

Hiking up the lift, our first hill

After taking the gondola high above Bariloche, followed by another long chair lift to the summit, we began our descent.

The trek kept us above the tree line for most of the day where the winds were strong and it was quite chilly. We traversed across massive rock fields on a trail marked only by spray painted dots on the rocks. Each step took concentration to move through the terrain. The massive canyon below us only added to the intensity and fun.

After going across the high rocks we entered a saddle which held a large piece of ice and was like a wind tunnel. 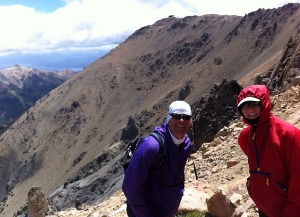 We held on to each other as we went through this small area as it began to snow. We weren’t really prepared for this kind of weather with our shorts and yoga pants but we made it. From there we went straight down through large and small boulders for another hour until we reached an alpine lagoon.

Several of us fell during this excursion and luckily no one got hurt. My fall was at the lagoon while crossing the wet rocks around the water. One step, slip, and my butt was on the rock and feet were in the freezing water. Others slipped and fell in the mud later in the day, so my cold, wet fall was at least clean.

After about three hours of the rocks we reached Refugio Emilio Frey. The refuge is part of a circuit of huts built throughout the region which allows trekkers to get warm, get a bite to eat, and sleep between long treks. We stopped for lunch and participated in the “hanging out with the trekkers” in the warmth. It is an interesting culture up in the mountains with some pretty interesting people up there.

Our three hour walk down was through mostly forest, which means we were protected from the wind. 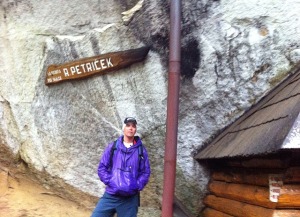 On the way down in the rain

The forest is lush and different from any we’ve seen other places. In this part of of the hike we encountered rain and then more rain. Instead of jumping on rocks we were avoiding mud. It sounds awful, but our group was so much fun and so positive that we enjoyed every minute. At the end, we were met at the lake, offered beer and coffee, and then transported by boat back to the estancia.

The entire trip took about seven hours of hiking and almost ten hours in total. We were filthy, cold, exhausted and very happy with ourselves. We’d do this adventure again in a heartbeat!

After a warm shower and a little rest we began the New Years celebration which included cocktails, a classical music concert with local musicians, followed by steak dinner and champagne toast at midnight with all of our new friends.

Tomorrow we’ll rest, get a massage, and enjoy our final full day at the estancia.

May your New Year be filled with health, happiness, and many adventures!