One of the many reasons we chose to come to New York was Steve’s desire to run the New York City Marathon. While he’s completed over a dozen marathons over the years, New York is a bucket list race. The New York City Marathon is considered one of the “majors” in the running world, and it’s set the standard for distance races across the globe. The 26.2 mile foot race covers all five of New York City’s boroughs and hosts over 50,000 runners from over 130 countries. Needless to say, it’s a big deal!

Steve’s been training for the race since May (well, really for years now) and it’s finally time to enjoy all the hard work. In addition to logging hundreds of miles, he has raised $2696 for the New York Road Runner’s Team for Kids (TFK) charity. Funds raised by TFK provide free or low-cost health and fitness programs to kids who would otherwise have no access to regular physical activity. 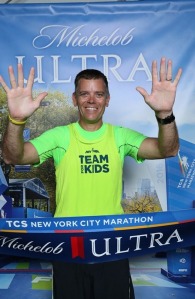 By supporting TFK, Steve received coaching support, as well as a connection to the New York running community, which he wouldn’t have had otherwise.

The New York Marathon kicks off with a week-long celebration of running, and we tried hard not to miss a thing! Here are a few of the highlights running up to the big day.

On Wednesday evening, Steve was invited to join TFK and Olympian and 2014 Boston Marathon winner Meb Keflezighi for a nighttime run in Central Park. 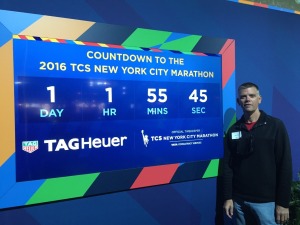 The “Light Up the Night” run celebrated the work of TFK and allowed runners like Steve to rub shoulders with one of running’s greatest and most beloved competitors. Following the run the group enjoyed socializing in the marathon pavilion, a huge entertainment space erected just steps from the finish line.

The next day we went to the marathon expo at the Javits Center in midtown Manhattan. Steve picked up his number, timing chip, and commemorative t-shirt. Every large race has an expo but we’d never seen one as large as this! We spent almost three hours going from booth to booth learning about running-related products and events. We gathered up a ton of swag, from energy bars to cowbells and from pain relief cream to chapstick.

Picking up the packet

On Friday morning we went for a jog in the park and happened upon the TCS Run with Champions at the marathon finish line. The Run with Champions gives hundreds of schoolchildren the chance to run 1500 meters and cross the marathon finish line with pro athletes cheering them on. It was fun and inspiring to watch some of running’s greatest names cheer on the future of the sport. Knowing that the event was supported by TFK was even more gratifying.

Saturday started with a special breakfast in the marathon pavilion for TFK participants. We were honored, along with 1700 others who support the cause. After a great breakfast catered by Tavern on the Green we heard from our hero Meb, as well as from students and teachers who benefit from TFK.

The big day finally arrived on Sunday with an early wake up call, subway trip to the southern tip of Manhattan, ferry ride at sunrise across to Staten Island, bus ride to Fort Wadsworth, and then a 3 hour wait to start the race. With over 50,000 runners, it takes over 90 minutes for everyone to start and there are three starting routes. Eventually all routes merge into one, but the start is complicated. Runners are sorted into waves which indicate start time and then into colors, which indicates the starting route. Steve and his running partner Greg Milbrandt (fellow Mesa Public Schools principal) were in wave four, which meant they didn’t start the race until after 11:00 a.m. 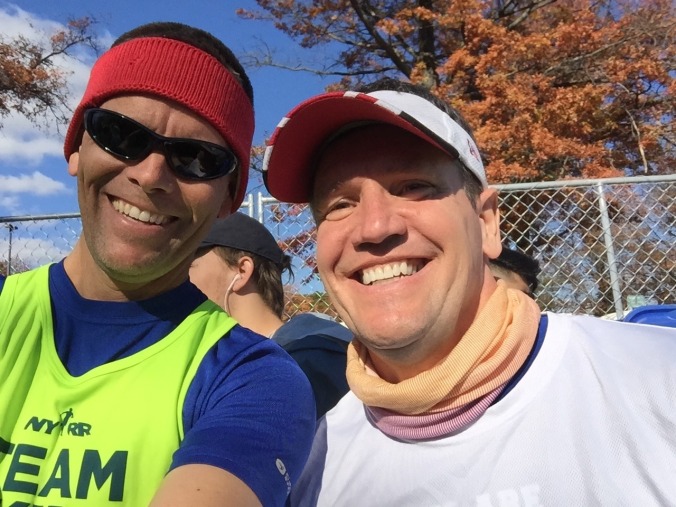 Steve and Greg waiting to start

The first two miles of the race are up and over the Verrazano Narrows bridge, which connects Staten Island to Brooklyn. After another 14 miles in Brooklyn and Queens the course crosses over the Queensboro Bridge into Manhattan and the “wall of sound.” First Avenue in Manhattan is known as the loudest part of the course with hundreds of thousands of people lining the road to cheer on the runners. From there they proceed north, across another bridge and into the Bronx. At this point they have run in all five boroughs of New York City. After just over a mile in the Bronx, the route turns south and back into Manhattan, through Spanish Harlem, and into Central Park. The race finishes at the southern end of the park, just north of Columbus Circle.

Steve and his running partner Greg took their time, enjoyed the miles, and finished in 4 hours and 51 minutes.

While it wasn’t the fastest time Steve had ever run a marathon, it was the most incredible experience. With over 1 million people lining the streets and over 150 bands playing along the route, the New York City Marathon is like no other race on the planet.