It’s hard to believe that two weeks have flown by since the marathon and we haven’t posted an update on our on-going Big Apple adventure. Here’s a rundown on how we’ve been spending our time since the big race.

The day after the marathon we took advantage of a 2 for 1 offer to visit the top of the tallest building in the Western Hemisphere, One World Trade Center. 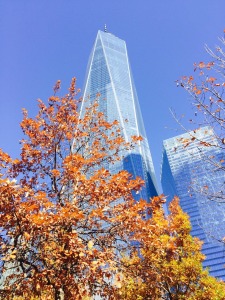 The three story observatory (floors 100, 101, and 102 provides 360 degree views of New York City and into New Jersey. One World Observatory was a fun way to see the entire marathon course from above, sort of. We were lucky to be there on a sunny and clear day.

Once the marathon hoopla was over we settled into “normal.” Normal for us includes regular visits to the Westside YMCA and afternoon strolls in Central Park. You can see many of the photos we’ve taken of the fall colors and park scenes. We really believe we’re here at the most perfect time of year as the weather has been cool but comfortable, and the daily changing colors have been magnificent.

In addition to enjoying the city at a little slower pace, we’ve been checking a few other sites off the list. One day we went to the Museum of Natural History and took in the dinosaurs and space rocks. On another day we took the subway to the DUMBO section of Brooklyn and enjoyed the views of Manhattan from Brooklyn Bridge Park.

This is also where we had the very best pizza so far at Juliana’s. Juliana’s is the mother restaurant of Grimaldi’s, which is now a well known pizza chain. The original stuff at Juliana’s, from a coal-fired oven, was awesome.

In honor of Dad, we attended the annual Veteran’s Day parade, which is known here as America’s Parade. It claimed to have 50,000 marchers and the procession went on for hours following a wreath-laying ceremony led by New York Mayor Bill DeBlasio.

We couldn’t come to New York around the holidays without going to the Rink at Rockefeller Center. Going earlier in the season was a little less expensive and easier to get in, so we went for it. While the tree is not yet lit, it was surrounded by scaffold and being decorated as we skated. We’ll go back at the end of the month to witness the official tree lighting.

A few times over the past few weeks we’ve taken in more of the fabulous entertainment available in this city. We were in the front row for a taping of The Late Show with Stephen Colbert, and we saw an interesting Broadway play called The Encounter. Tonight we went to the Shops at Columbus Circle to see a free performance by stars of Kinky Boots. Our goal is to catch at least one more musical before we leave and we’ll be entering the daily lotteries to try to score low cost tickets.

The Macy’s Thanksgiving Day Parade is in just three days and our next blog post will feature this iconic experience. Stay tuned!