In English, the title of this blog is “We are learning Spanish!”

We’re on the road again! After a busy and full week in the beautiful Chilean city of Viña del Mar, we have a little time to post a blog. Let’s get up to speed…

We had just about one month at home to celebrate the holidays, catch up on business, and repack for the next trip. On Saturday, January 14th, Steve’s parents once again chauffeured us to the airport from Prescott. (Thanks Judy and Larry!) It was the start of a long journey through Dallas and Santiago, Chile to the coastal resort town of Viña del Mar. We are here for two weeks to brush up on our Spanish and to enjoy the sun and sand before heading south.

Our home base is the home of Maria Cristina, a wonderful Chilean woman who offers homestay opportunities to students of the language school we are attending. Cristina has a small three-bedroom apartment just a block from the beach, and she rents all three rooms to short- and long-term students. She sleeps on the couch! We were assigned to Cristina through school, and while the accommodations are basic, we feel lucky to have landed in a such warm and welcoming home. Cristina cooks at least two meals a day for us, and we now have a routine of ending the day together with a glass of Chilean wine. She and the others who live here (one other student who is Chilean and Cristina’s cousin and family) speak only Spanish, so it’s kind of an all or nothing thing. If you need something you have to figure out how to say it in Spanish.

During the week we attend ECELA, a Spanish language school which is just a 10 minute walk down the beach. 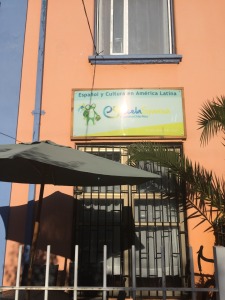 For four hours every morning we do two hours of grammar and two hours of conversation in groups with others from all over the world. Sometimes frustrating, always fun, immersion is the best way to learn a foreign language. Plus, there are some very interesting people you meet along the way. We’ve done programs like this twice before (in Cuernavaca, Mexico and in Quepos, Costa Rica) and each experience is unique. Here in Chile they use certain words that aren’t used in other countries, so we are continually challenged.

Each day after school there has been a unique activity, either offered by the school or with Cristina. On Monday we attended a class in making sopaipillas, a traditional Chilean snack. On Wednesday we went with other students to the Varamonte vineyard in the Casa Blanca Valley to learn about (and taste) Chilean wine. 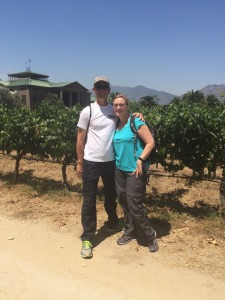 Since the tour was conducted in Spanish, we were happy to have a little knowledge about wine-making from our previous travels. Otherwise, we never would have understood our guide. We probably got about 85% of what he said. Oh, and the wine was great!

One evening this week we went with Cristina and her friend Marcela to the Reñaca area of Viña to see a concert of tango music. On another day, Marcela drove us about 30 minutes inland to the country home of her friend. The “campo” had a beautiful swimming pool, gardens, and fruit trees. We spent the day enjoying property, practicing our Spanish, and picking and eating the most delicious plums we’ve ever tasted.

The week concluded with one more morning of classes, followed by lunch at home accompanied by the inauguration of Donald Trump. We’re amazed that our Chilean family seems to know as much, if not more, about American politics than we do. Everyone was glued to the television during the telecast, knowing all the faces and names of our country’s leaders. They know John McCain, Paul Ryan, Rick Perry…all of them. We are willing to bet the Chileans (at least the ones we are with) know more about what’s happening in Washington than many Americans do!

Viña del Mar is the most popular beach getaway in Chile. 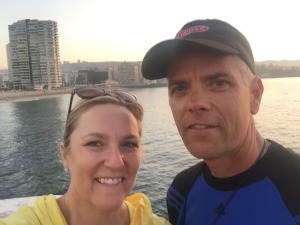 We’re in the middle of the summer season, and with heatwave we are having, the town and beach is expected to be packed with visitors this weekend. It’s kind of how Arizonans flock to San Diego in July. We’ll probably spend some time on the beach to soak it all in before we head south to colder climes next weekend. We hear it’s currently snowing in Prescott, so we’re happy to be at the beach!

Exploring new places is one of our favorite things to do. We hope you enjoy the photos from our week in and around Viña del Mar.

Enjoy the pictures and stay tuned as we’ll post more next week. Thanks for following along!